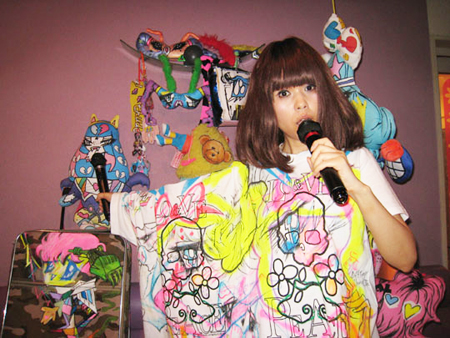 By DAVID HOENIGMAN
Special to The Japan Times

As a child growing up in mountainous Yamanashi Prefecture in the 1970s, artist Shojono Tomo had an irrational fear of using the brakes on her bicycle ― though none whatsoever about riding just as fast as she could.

"I would either purposely crash into a wall or my friends would form a wall and try to stop me safely," she recounts now as if such means were an unremarkable alternative to simply pulling the two levers on her handlebars.

"One day though, I couldn't find a wall," she continues, "and when I hit a hill in a certain way I flew through the air like E.T." Tomo and the bicycle wound up high off the ground, entangled in the grapevines that make the Yamanashi countryside famous for its wine. "My poor mother thought 'my baby is crazy.' "

Now, years later, I'm standing on a corner in central Tokyo awaiting Tomo's arrival. She appears on a boy's BMX bike, tote bags filled to capacity and with plush toys swinging wildly from both shoulders. Another oversized piece of luggage is haphazardly strapped to the rack behind the seat, and a suitcase, hand-painted in Tomo's eye-catching designs, wobbles precariously atop the handlebar basket.

True to form, she crashes softly into the base of a lamppost, bringing herself and her kaleidoscope of colors to a halt. The suitcase shoots off the handlebars and lands at my feet. As I bend down to pick it up, I notice she's wearing a pair of the graphic tights that have helped propel her so suddenly and so recently from being virtually unknown to indie-fashion design stardom.

In July of this year, Tomo received word from her agent that rising American hip-hop star Nicki Minaj was requesting a selection of items from her EnocDouter brand to wear during an upcoming performance on the nationally televised TV show, "Good Morning America."

"At first, since she's not so big in Japan yet, I didn't know who Nicki Minaj was," Tomo declares with some candor.

"But I read about her on Wikipedia and watched a documentary about her life. I was impressed by the struggles she went through with her family growing up, and how she was able to turn it all around in such a positive way.

"And I loved her fashion sense ― very unbalanced, playful and quirky like my own. I felt a definite connection and I was very excited that she wanted to wear my designs."

Though many will remember Minaj's "Good Morning America" performance on Aug. 5 for a well-publicized wardrobe malfunction, those with their eyes cast a bit lower also found something enticing: Minaj was sporting a pair of sky-blue tights decorated with distinctive, abstract-cartoony Shojono Tomo designs. 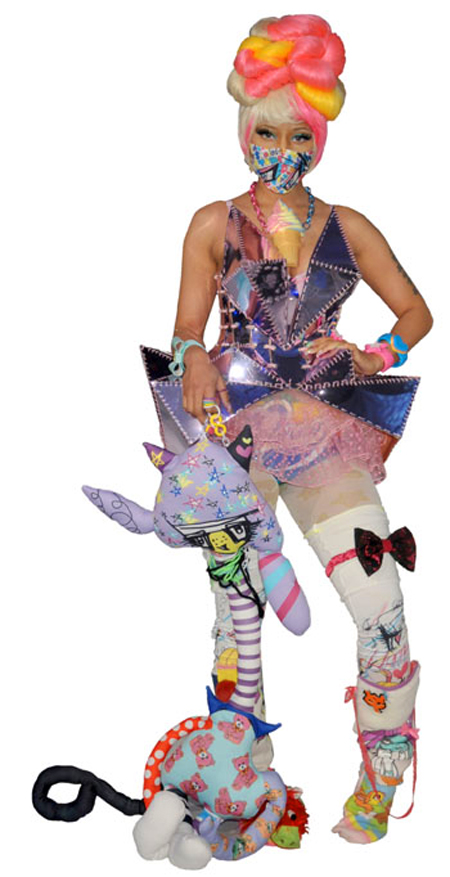 That flash of prime-time exposure was all it took to spark a wave of interest in Tomo's work that had her management scrambling to set up supply lines into the U.S. market and get her products onto shop shelves there.

But the roller-coaster had only just got going. On Aug. 28 at the MTV Video Music Awards held in Los Angeles, Minaj accepted the award for best hip-hop video for her song "Super Bass" ― and yes, she was decked out in items from Tomo's fashion brand, EnocDouter. In fact, Tomo's designs covered Minaj's face mask, hot pants, socks, and leg-warmers. And the singer was even toting a Tomo-made toy as she posed with her award.

Not only that, but Minaj also mentioned Tomo by name in the post-event interviews ― and demand for her EnocDouter brand predictably skyrocketed. With a website to cater to overseas fans in the works, Tomo had arrived on the global style scene.

Exactly how Minaj first came across Tomo's work remains a mystery, but considering the immense creative output Tomo has sustained since the early 1990s, perhaps her recent elevation shouldn't come as such a surprise.

Strictly speaking, Tomo is an illustrator/manga artist/experimental musician/toy-maker/gallery artist who happens to dabble in fashion design.

"I don't really know where one thing ends and another begins. As a little girl I'd find a bit of garbage, display it around the house and make up a story about it," she says. "Everything started from there."

As swept up in all this as she is, though ― and as busy as she was preparing for shows of her drawings and toys in Los Angeles and San Francisco ― the one-time graphic artist and goods designer who went freelance as an illustrator in 1993 still made time to give this writer a private showing in the interests of JT readers.

So, back on that street corner in central Tokyo, once we dust off her suitcase and corral together her things, we make our way to the nearest karaoke box and take over one of the rooms.

Within minutes her soft-toy characters fully cover the table, most of the seating and (thanks to Tomo's creative display techniques) the entire surface of a wall. Over the wide-screen monitor she drapes her T-shirt built for two that's meant to be worn by a couple standing side by side; this particular design dubbed "Chocolate Destiny."

For me, as Tomo introduces her creations to me one at a time, all this oddly brings to mind the childhood joy of setting up a secret hideout with a friend and gathering our most treasured toys inside.

"His name is Melonman. He's Amy's boyfriend. His face can change. This is his second face. He got burned by cooking oil. He became trouble. He became like a melon. Everybody calls him Melonman. It's a little sad story. He lost his hand in junior high school."

Caro, of the artist-management firm Sweet Streets, who represent Tomo in the United States, sees the artist's disinclination to follow convention and her continual movement forward as the keys to her mass appeal. "I think what makes her work unique is her use of clothing as a canvas and way of looking at the world," is how she puts it.

The name the artist has given herself ― Shojono Tomo ― is also a feature of that canvas, since in Japanese it means "friend of little girls," and suggests an eternal child drawing everything and everywhere without limitation, and always full of new ideas.

But just as Tomo's choice of nom de plume gives an insight into her character, so does the name of her fashion brand.

EnocDouter is a bilingual word-play on "inoshishi's daughter." Inoshishi is the Japanese word for wild boar, and in a well-known Japanese idiom it's a boar (not a bull, as in china shops in the West) that rushes headlong into something disregardful of the consequences.

It's a phrase perhaps meant to discourage in some what Shojono Tomo has come to embrace in herself to the delight of us all: a refusal to use the brakes on her bicycle.
For more on Shojono Tomo and her merchandise, visit www.shojonotomo.com; and, in Japan, www.shojonotomo-shop.com; or in the United States, shojonotomo.bigcartel.com. 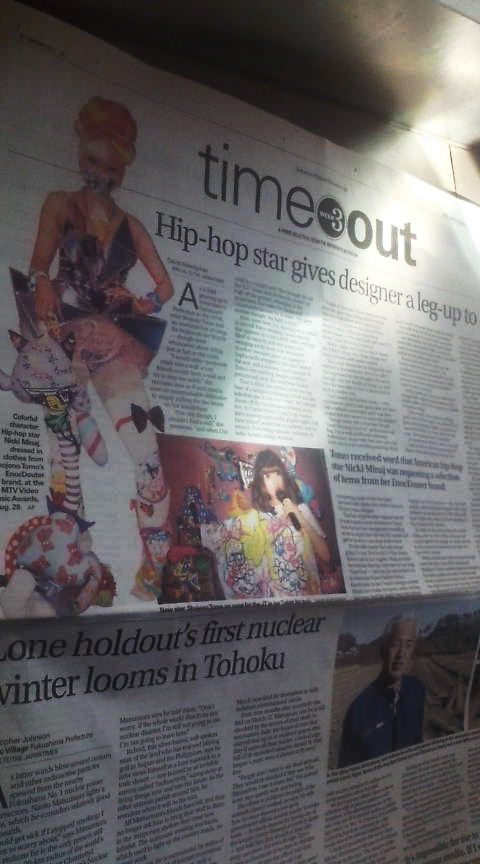 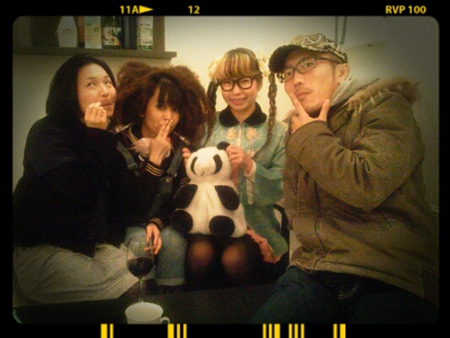 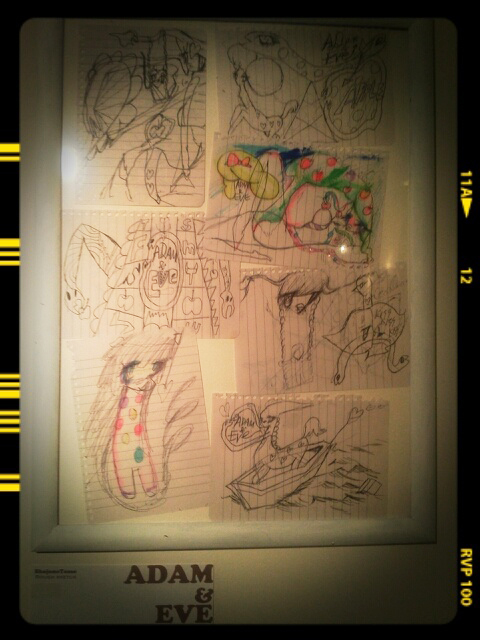 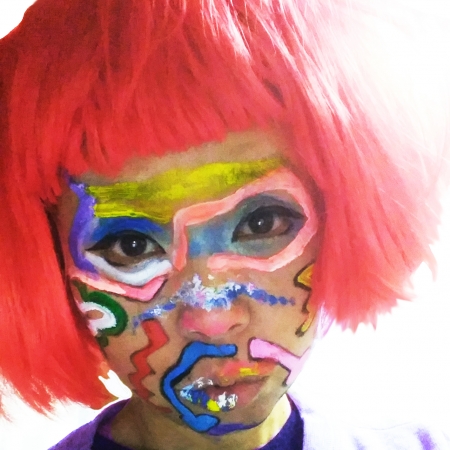